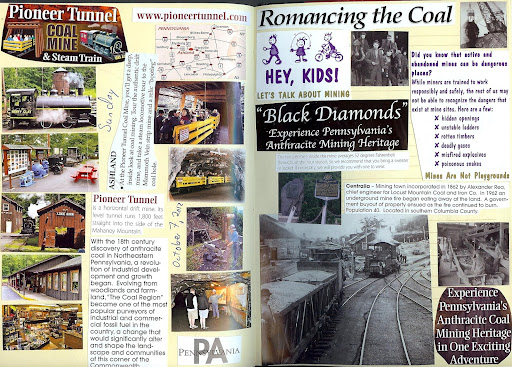 I took a solo road trip a few weeks ago and my first stop was The Pioneer Tunnel in Ashland, PA. The first part was a steam train ride, where the scenery was gorgeous, if a touch chilly. It was a little weird, as the train started out by going backwards to the end of the line, then coming back forward again. Afterward, I took the coal mine tour. I'd never been in a real mine before, and it was pretty fascinating. The headlamps they used to use had an open flame, which was a bit of an early warning if you hit "heavy air" (air without enough oxygen), as it would go out and you might have time to escape before suffocating. On the other hand, if you hit a pocket of methane, your day was pretty much ruined. At one point the tour guide turned out the lights without warning. I'm not sure some of the other folks in our group appreciated that too much. He also commented that, back when this was an operating mine, the "wishing well" we'd just passed had no grate over it, and in fact descended some thousand feet straight down. Safety first!

My next stop was Centralia, famous largely for its inspiration of Silent Hill.

Centralia, like much of this part of Pennsylvania, was a mining town. About fifty years ago, the government decided to make use of the empty mine shafts as landfills, and filled them up with trash. When they got full, they had this brilliant idea to set the trash on fire in order to make more room. The fire caught a vein of coal, and then things got really bad. The fire has continued to burn all this time, and they expect it to continue for another couple centuries at least. There isn't much to see today: mostly weeds and cement slabs where buildings used to be. There aren't even any street signs. The only truly interesting part is Graffiti Highway, the closed-off section of 61 where the fire caused it to collapse. The entire length of it is covered in graffiti of varying quality.

This isn't the sort of place I'd expect most people to feel is worth the hours one would have to drive to get there (it's pretty much as far into the middle of nowhere you can get in that part of the country), but I had a good time and am glad to be able to say I was there.
Posted by melydia at 12:41 PM